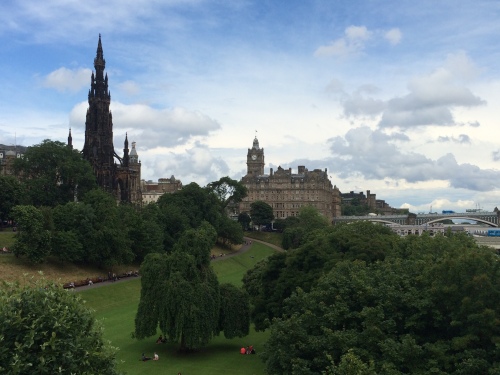 After a week in Wales, Tom and David and I flew from Cardiff to Edinburgh. We stayed in New Town. The construction of New Town started in 1767. Expansive streets with names like George and Queen and Princes were built for the large homes of wealthy Scots. Narrower streets behind allowed servants to enter the homes from the back. These narrow streets, now closed to cars, are filled with pubs and shops and restaurants. Our apartment was located on Rose Street, the narrow street just behind Princes. From this central location, we could walk to everything. We walked to the National Gallery and the Scottish National Portrait Gallery. We walked down the Royal Mile and into shops selling shortbread and Scottish cashmere. We walked to the Edinburgh Castle.

Edinburgh Castle is home to the Stone of Destiny. This stone is a symbol of Scotland and the monarchy, even though it seems rather unremarkable. Our Liberty Bell is unremarkable, too, yet touching it still brings me to tears.

The Scottish National War Memorial feels like a chapel on the Castle grounds. We hush and look up at the names of the fallen soldiers carved on the walls.  Family members find their loved one and reach up to run their hands across the letters.

Overlooking Edinburgh, just beyond the Castle parapets, a little garden is set aside as a cemetery where soldiers, since the time of Queen Victoria, have buried their dogs.